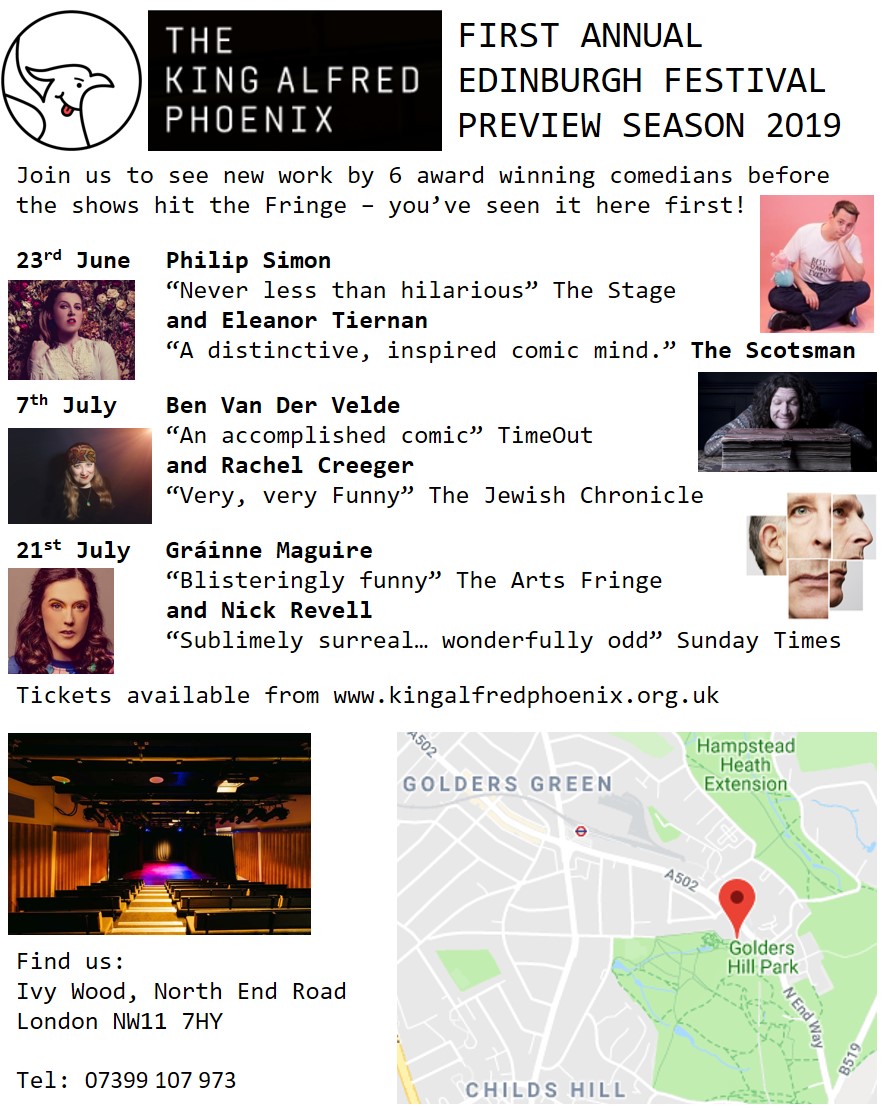 Philip Simon and Eleanor Tiernan (MC Rachel Creeger) perform at the Phoenix before heading up to the Edinburgh Comedy Festival.

Having played Daddy Pig in Peppa Pig, when Philip became a dad surely there was only one expert he’d turn to for parenting advice? Yes, that’s right, you’re not misreading this; Philip really did play Daddy Pig in Peppa Pig (the stage production, not the TV show, don’t get carried away!) Join Philip for an hour of award-winning stand-up comedy about dating, parenthood and, of course, Peppa Pig … just don’t bring the kids! Jewish Comedian of the Year 2015. BBC New Comedian Shortlist nominee. Writer for Mock the Week.

“Philip Simon is never less than hilarious” (The Stage)

WINNER of the Jewish Comedian of the Year 2015

WINNER of the Lastminute Comedy Comedian of the Year 2015

Philip is one of the most sought after comperes and opening/closing acts working on the UK comedy circuit today. He gigs throughout the UK, as well having performed as far flung places as America, Scandinavia, Europe, The Middle East and New Zealand where he headlined at The Classic in Auckland.

As well as working as a rehearsal guest on BBC TV’s Mock the Week and Taskmaster for Dave, Philip has written sketches for BBC Radio 4 Xtra’s Newsjack and The Canal Cafe’s Newsrevue.

In bed gorging on true crime while outside actual crime fails to tantalise? Tiernan (BBC Radio 4 Newsquiz) is back to spark your joy. ‘Amiably acerbic’ (Stewart Lee). ‘Funny, fanciful and fearless’ (Graham Norton).

Eleanor Tiernan is a stand up comedian, writer and actress known for her uniquely oblique world view. She was recently a panelist on BBC Radio 4’s News Quiz and Where’s the F In News? as well as BBC NI on The Blame Game. Her stand up has featured on Comedy Central’s The Alternative Comedy Experience and led her to be chosen as support act for top stand up comics including Stewart Lee, Tig Notaro, Ardal O’Hanlon, Jason Manford, Jason Byrne and Reg D Hunter among others.

Is Rachel ever honestly present in the moment? It’s funny how seeing herself in someone else’s reflection sparks thoughts she only admits to herself in the middle of the night. Or on stage. Sometimes it takes a little darkness to shine a light on the truth. The only Orthodox Jewish Female Comedian currently on the UK comedy circuit returns to the Fringe with a bravely funny and captivating show.

Rachel Creeger has been running and compering comedy gigs since 2011 and is resident MC for Upstairs at the Adam & Eve. She is an award winning comedian and director, and an established writer, known for dark comedies ‘An Insomniac’s Guide To Ambulances’ and ‘Staffroom’. Rachel has been touring her 4* reviewed, sell out solo show ‘It’s No Job For A Nice Jewish Girl’, winner of the Best Comedy Award at the Greater Manchester Fringe 2017, around the UK and Israel, to full houses and great acclaim. As heard on BBC Radio London (regular guest) and BBC 3CR.